Ronnie Coleman is a bodybuilding legend in the true sense. He won IFBB 26 times and Mr. Olympia 8 times, and this made him one of the most successful bodybuilders of all time.

In this article, we will discuss Ronnie Coleman’s workout routine from the time when he was a pro bodybuilder. 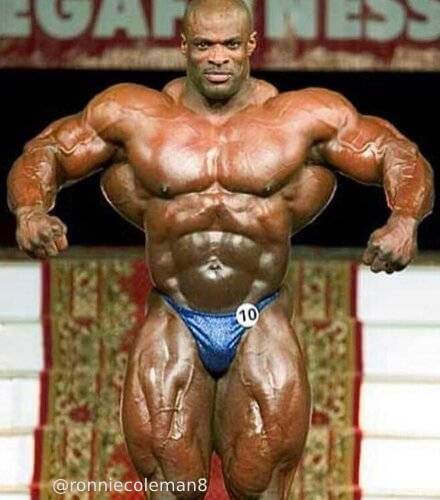 Ronnie Coleman was born on May 13, 1964, in Monroe, Louisiana. He is a retired American professional bodybuilder. In fact, he became one of the richest bodybuilders in the world due to his amazing bodybuilding career.

Ronnie Coleman’s workout routine focuses on all of his muscle groups throughout the week.

On Wednesday, he exercised his chest and triceps muscles and from Thursday, he would repeat the exercise cycle.

Ronnie Coleman was a pro bodybuilder so it was easy for him to follow this training routine.

However, if you are a natural bodybuilder then you might find this routine difficult. You should customize this workout routine according to your body’s potential.

You can consider training only 3 to 4 times a week, instead of 6 times like Ronnie. That will be easier for your body.

This is his workout routine for all seven days of the week.

Ronnie had an athletic physique so he became the middle linebacker for the football team of Grambling University. He finished his major in accounting and left the University.

Even after that, he did not consider working as an accountant, instead, he joined the police force and became an officer.

In the year 1990, Ronnie Coleman participated in his first bodybuilding competition.

He was an amateur at that time but still, he participated in the Mr. Texas competition. He won that competition easily.

After that, in 1995, he became a professional bodybuilder.

Then in 1998, he won a big bodybuilding competition, the Night of Champions.

He also went on to win his first Mr. Olympia title in the same year. Flex Wheeler got second place in that same competition.

However, in 2006 history was created when Ronnie lost the Mr. Olympia title to Jay Cutler. He got second place that year.

Then in 2007, he got 4th place in the competition, and that after he never competed in Mr. Olympia.

There is no doubt that Ronnie Coleman is one of the top bodybuilders of all time because he has set records in pro bodybuilding like no other.

There was a time when Ronnie Coleman had the most IFBB pro wins under his name. He won a total of 26 titles. However, now his record has been broken by Dexter Jackson.

Ronnie Coleman is a decorated bodybuilder and he has achieved many accolades in his career. He would win all competitions easily.

In fact, his biggest rival Jay Cutler also accepted that if Ronnie was in his best physique then he would have never been able to defeat Ronnie during the 2006 Mr. Olympia competition.

This clearly means that even Coleman’s rivals knew that he was definitely a better bodybuilder.

Unfortunately, Ronnie suffered an injury and that forced him to retire from pro bodybuilding at a young age.

He underwent a few surgeries to overcome the injuries but those surgeries ended up being botched. As a result, he is unable to walk now.

There is currently no possibility of Ronnie Coleman returning to bodybuilding.

Only a miracle can help him get back to his amazing days of bodybuilding.

We at RippedNatural.com respect him completely and wish him all the best for his future endeavors.

It is highly recommended to never use steroids for bodybuilding. The reason is that steroids are anabolic in nature and they can cause serious side effects and health problems.

There are many different types of legal steroid alternatives available in the market these days.

These products are clinically proven to give similar results to anabolic steroids but without side effects. So, you can use them and achieve your bodybuilding and fitness goals rapidly.

TestoPrime is one the most popular and powerful testosterone booster that is made from natural ingredients only.

Crazybulk DBal is a legal alternative to Dianabol. It gives the same bodybuilding results without side effects.

The number one fat burner supplement available today is PhenQ. It is the legal alternative to Phentermine. Also, reduces weight rapidly without side effects.